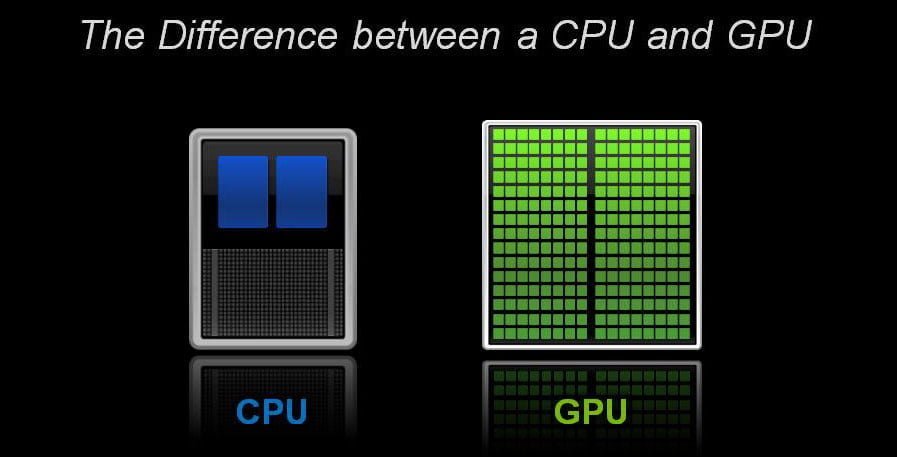 High-quality imagery is vital to media, films, graphic design, animation, architecture and interior design industries. All these industries were historically dependent on the CPU rendering processes to get all their visuals. Over the last few years, GPU rendering technology has invaded the IT industry with a sudden storm.

Although GPU took some inspiration and structure from a CPUs, GPUs are considered to be dramatically faster than CPUs at rendering. But is this at the expense of quality? We need to look at many aspects before deciding whether GPUs are worth investing in or not.

What is GPU Rendering?

GPU stands for Graphics Processing Unit. Its design and structure resemble a typical CPU, but it has been specifically designed to handle complicated graphics processing in a highly professional digital workstation. A GPU shares the load of the overall computer processing tasks by taking responsibility for processing graphics. GPUs have been designed to render on specific render software packages such as Chaos Group’s VRay Next, Otoy’s OctaneRender and Maxwell Render.

The hottest question floating around today is, whether it is time to invest in GPU rendering or not. The answer to this question is highly subjective and majorly depends on consumers’ demands. For example, the graphical rendering needs within the architectural industry differ substantially, when compared to the needs of a VFX house.

You must first define your rendering needs before deciding on progressing toward GPU rendering. If you’re an architect or an interior designer, then the speed of GPU rendering can give you an advantage over competition and can increase your capacity for fulfilling client projects. However, if you work in a state-of-the-art animation studio, then absolute quality and accuracy is imperative for your work. Traditional CPU rendering might take hours, but it is generally considered to generate higher quality images and guarantees an output devoid of “noise”.

GPUs have far more cores than a CPU, but each core in a GPU runs relatively slowly when compared to a CPU processor core. CPUs are still preferred by many who swear by the precision and quality of the generated imagery.

CPUs are fantastic rendering options and are still very relevant to today’s professionals in certain workflows. A CPU core has a far more instruction sets available to them than a GPU. As a result, a CPU is more flexible in the types of tasks they can perform. CPUs also have higher levels of cache and much higher clockspeeds than a GPU. Therefore, under certain rendering conditions, they may be even quicker.

Take a look at our CPU based rendering solutions.

GPU rendering has been gaining in popularity for years. Below we explain why:

The power of a GPU can be equivalent to anywhere from five to twenty CPUs. Meaning it would take only one machine to do the job of five or twenty CPU machines put together. The increase in computation power results in GPU based rendering solutions producing results faster.

Since the artists or designers no longer need to wait for hours for the rendering process to complete. Professionals can now look at the renders in a matter of minutes rather than hours, making the design process in general, far quicker and efficient.

By owning a GPU, any artist or designer will be empowered to get hi-end quality designs from the comfort of their own home. GPU rendering eases out the difficulties large scale networked CPU rendering solutions introduce. Professional based in an office or residential studio owners can now have access to enterprise-level rendering solutions.

Instead of paying hefty amounts for cloud-based CPU render farms, individual artists can afford to install just four GPU units and enjoy studio-quality outputs at a fraction of the price.

Animation and film production studios work with the highest quality render outputs possible, and for this, they have been hiring cloud CPU render farm services. Even with such a service, the time taken for producing an output did not change substantially. GPU rendering solutions are uniquely positioned to cost-effectively allow users to bring rendering capabilities in house to improve render times and save money.

GPU servers have proven to have huge potential for growth. For example, studios may choose to start with a rackmount server capable of containing up to 8 GPUs. Even half populated this is equivalent to a substantial CPU render farm. Future upgrades are cheap and easily achievable by simply adding additional cards. Now imagine if you wished to upgrade a CPU based render farm. Not only due you require entire systems but also many of them to achieve the same performance improvement a single Graphics Card provides.

5: Technology from the Future

Performance per watt, GPUs consume less power than CPUs. Fabrication processes are still improving, and technology advancements for GPUs are making them more efficient with every generation. Furthermore, with the amount of onboard graphical memory now available on the current generation of GPUs and technologies such as NVLINK creating pools of graphical memory across multiple cards. Large scale high resolution renders on no longer an issue.

NVIDIA has now incorporated Dedicated Ray Tracing technology into its latest generation of graphics cards. In the future software houses such as Chaos Group have pledged to release compatible application versions to take advantage of this new technology. We expect to see dramatic performance gains from these new dedicated Ray Tracing Cores.

Whether you believe CPU or GPU rendering is right for you boils down to your specific wants and needs. We believe that the GPU will eventually dominate the future of professional rendering, but whether that day has come just yet, we aren’t so sure. GPU rendering has many benefits that for the right company or individual make it a well worthwhile investment. High-end animation or the graphic design house who can support the infrastructure of a CPU based render farm may still want to stick with this option for now.

We use cookies to ensure that we give you the best experience on our website. If you continue to use this site we will assume that you are happy with it.OkPrivacy Policy