Rhino also embraces a broader community of developers with its open-source platform meaning that the software is highly customisable. With an extensive collection of 3rd party plugins available to users. Rhino is often tailored with tools and features ideally suited to the end-users workflow and requirements.

To make full use of a professional application like Rhino you a require professional Workstation designed for the task. Workstation Specialists Rhino Workstations make use of the latest technologies ideally configured and optimised to accelerate your workflow.

For a tailored quotation built around your needs request a quote online or contact our expert sales team today at +44 (0) 800 180 4081 or email sales@wksmail.com.

Rhino benefits from a processor that runs at a high frequency even if that processor has only a few cores. 3D Modelling tasks only use very few cores and threads and therefore selecting a processor with as fast a clock speed as possible will provide the best results.

If you make use of the included Rhino Render or one of the many available CPU based rendering plugin available. You will benefit from selecting a Workstation platform that contains more processor core and threads. We recommend our AMD Ryzen Threadripper and Intel Core X-Series range of Workstations for users who perform renders. These processors maintain very respectable clock speeds for 3D modelling tasks while offering the extra cores and threads to keep your render times low.

From our experience, we would recommend a professional NVIDIA Quadro graphics card with at least 4GB VRAM. NVIDIA Quadro cards are slightly more reliable than their consumer-orientated NVIDIA GeForce counterparts. We have had many Rhino customers running NVIDIA Quadro for years, and they are delighted with the results.

On the other hand, if your budget is tight, then there is no reason the NVIDIA GeForce range will not be suitable for you. Both varieties of NVIDIA graphics cards, as well as alternatives from AMD, are fully compatible with Rhino.

For those who plan to GPU render with a plugin such as Chaos Group’s V-Ray Next. We recommended selecting a high-end NVIDIA graphics card. For exceptional performance, you should configure multiple cards. GPU rendering scales very well; therefore, by adding a 2nd graphics card, you will almost double your GPU rendering performance.

The minimum requirement for system memory stated form Rhino is 8GB. In our experience, this is too low for a modern professional Workstation. A Rhino user working on relatively large projects or multitasking with other applications will soon fill up 8GB of RAM and system performance will suffer dramatically.

We recommended a minimum of 16GB-32GB of RAM to all our Rhino customers. By increasing the amount of system memory to at least 16GB, this ensures you have the headroom needed to keep your system operating as efficiently as possible, without the worry of hitting a memory bottleneck.

We highly recommend configuring your next Workstation for Rhino with a Solid State Drive. SSD’s are significantly faster than traditional Hard Disk Drives. Faster drive speeds will make your system far more responsive, much quicker at booting into Windows and loading applications/project files will be a breeze.

There are two types of Solid States Drives available today. SATA based and PCIe NVMe drives. Both are suitable for use with Rhino however, for ultimate performance, you should select an NVMe based SSD. If the budget is more of a concern to you, then SATA SSD’s would be the most suitable.

You may also want to install a secondary traditional Hard Disk Drive. HDD’s are much slower than SSD’s, but they do offer substantial storage capacities at much lower prices. We recommend reserving the secondary HDD for files you wish to store long term to ensure you maintain maximum performance with your current projects.

If you are a Rhino user on the move, we have a wide selection of professional Mobile Workstations to suit your needs. AEC professionals are no strangers to working on the go but getting the computing power needed can be a challenge.

Workstation Specialists Mobile Workstations are the solutions you need. Supporting the latest NVIDIA Quadro and NVIDIA GeForce graphics cards, high-frequency Intel Core i9 processors and 64GB+ system RAM. Now you can take your Workstation with you anywhere.

Other Ideal Systems For Rhino 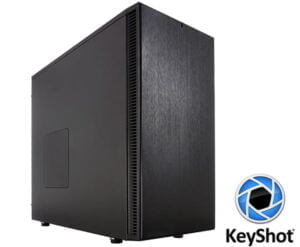 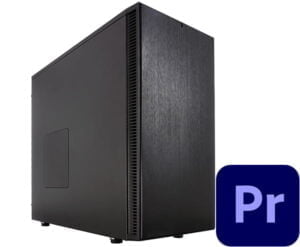 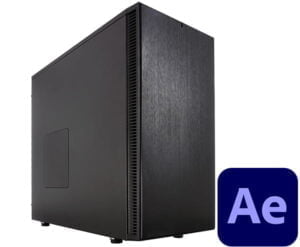 Adobe® After Effects CC in 2022 can be quite a tricky application to configure a Workstation for optimally. For example, After Effects has been a