The aim is to feature as many CPU Cores, CPU Threads and GHz as possible per node; whilst opting for the sweet spot on power consumption and purchase price. Opting for three slightly slower (and cheaper) nodes can actually work out faster than 2x fast (more expensive) nodes as their combined performance is greater

Both setups cost about the same, and despite the slightly slower GHz nodes being slower individually; combined as part of a render farm they are faster for rendering. By using a more efficient rendering technique like satellite, bucket or distributed rendering a render farm can render faster, and speed up your rendering by using the combined performance and power of the entire farm. So whether you have 2x or 200x render servers at your disposal having a number of separate rendering systems allows you to easily ‘farm’ out your complex, slow 3D rendering tasks for much quicker rendering results.

Example: If you create complex animation sequences (of any resolution) you no longer have to wait whilst all these frames are processed by you 3D modelling computer (100x frames @ 10mins per frame = Approx 20hrs total render time), by rendering on a render farm of just 10x nodes this could be reduced to under 1hr. Each node would render a frame at a time, therefore 10x frames could be rendered simultaneously (100x Frames @ 10mins per frame x 10x Nodes = Approx 1hr)

Alternatively if you create very high resolution images (CG Property, Architectural Visualisation, etc) then you can easily use a render farm in a similar way. By using the distributed (bucket) rendering technique your high resolution image is simply cut into smaller more manageable pieces and then sends each of these smaller images to be rendered, one piece/image per rendernode. If you have the same 10x node renderfarm as the above animation example then your image would be split into 10x pieces and rendered across this many render buckets. The total render time would be 10x faster than using just 1x node on its own, or typically 20x faster than using your 3D modelling computer/workstation.

We have a very large database of rendering and render time and benchmarks scores. This will allow us to provide you with up front and informative performance scores, so you can gauge the level of performance you’ll likely see when upgrading to high speed rendering systems from Workstation Specialists.

We have specially developed a range of desk-side and rack mount rendering systems that can perform remote/distributed computers that feature up to 24x processor threads for outstanding high speed render performance. Powered by the very latest generation of computer architecture and available with a variety of GHz clock speed sour RS series of products can be specially built to meet any customer requirement (price, project, specification or environment). The RS-D series is especially quiet and is perfectly suited to smaller studio and freelancer environment where size and low acoustics are important.

For help, advice or further information on the best way to manage a working render farm/node please feel free to contact our knowledgeable sales team.

Cinema 4D is an industry-leading 3D Modelling, Animation and Rendering application developed by Maxon. The powerful tools within Cinema 4D make it an ideal choice 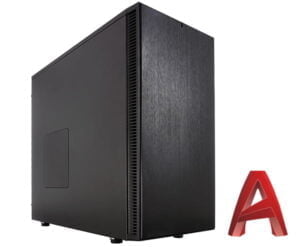 Autodesk AutoCAD was first introduced to the world way back in 1982, but despite its age, it’s relevancy and popularity are still incredibly strong with